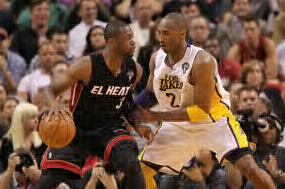 The Miami Heat snapped a 5 game losing streak with a huge victory over the Los Angeles Lakers 94-88 Thursday night.

Miami put the ball in Dwayne Wade’s hands down the stretch and good things happened. On three straight possessions down the stretch, Wade attacked the basket and either scored or assisted on a basket. Wade who scored 8 fourth quarter points, finished with 20 points. Wade also had a huge steal on Kobe Bryant in the last minute, which led to a LeBron James slam. James came close to a triple double with, 19 points, 8 rebounds, and 9 assists. Chris Bosh had a team high 24 points and 9 rebounds.

For LA, the loss snapped an 8 game win streak. This was also their second loss to Miami this season. Kobe Bryant led the team with 24 points and Pau Gasol added 20 points. Andrew Bynum contributed 13 points, and 12 assists, but missed a crucial layup within the final minute.

Miami was desperate for a huge win and they got it tonight. Will this spark a run for Miami, or was this a flash in the pan? We will have to see how the stretch run of the season pans out…