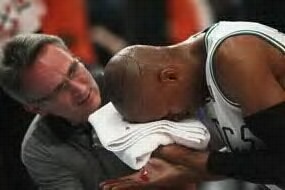 What is wrong with the Boston Celtics?

Consistent with the recent trend, the Celtics came out with absolutely NO ENERGY monday night and were blown out by the Knicks in the first half. The Celtics would rally in the second half for a 96-86 victory. The Celtics still own a 50-19 record, and are tied atop the East standings. Still, is this the Boston team that we all know and love, or is something different?

Are the old legs simply getting tired? As I mentioned earlier, the Celtics routinely come out the gates slowly and are playing catch up all night. The Celtics’ Big 3 are all over 32 years of age and continue to log major minutes. Or is it something else?

Are the Celtics merely playing possum, duking teams into believing that they are over the hill, therefore taking the Celts lightly? Could it be something else?

Could it be the disappearing act of Rajon Rondo’s game? Rondo started the season at a blistering pace, leading the league in assists by a wide margin. Rondo’s numbers have come back to the pack since the all star game, and he is playing more like the Rondo from 2008 and not 2010 and 2011. Not only has his assists gone down, but so has his points and field goal attempts. Is he once again not attacking due to his fear of the free throw line? Or is he still not over the departure of his best pal?

Maybe the Celts just can’t overcome the trade of Kendrick Perkins. Rondo’s game has gone downhill since his best friend on the team was traded. Also, the defensive mystique of Boston has disappeared. Although they still lead the league in points allowed, teams are not afraid of the Celtics anymore. It could also be the bench.

Jeff Green, Troy Murphy, and Delonte West still look confused out on the floor together. Also, the O’Neal brothers haven’t played in what has seemed like ages. The bench is still a work in progress, but is the work being done at the wrong time?

Is it Doc’s fault? Has he lost his guys? I can remember a time when Boston would respond to Doc’s cries for more effort and defensive intensity. Boston seems to no longer be responding to Doc’s pleading at times. It also seems as if Doc is making all the wrong calls, leaving bench players in too long.

Has the window closed on the Boston Celtics? Or maybe nothing is wrong and the Celtics are right where they want to be. Maybe a taste of their own blood is all the C’s needed. Case and point, tonight’s game against the Knicks. They start slow, then turn it on in the second half, in particular the fourth. Is this the Celtics’ blueprint for victory?

So many questions that need answers and only one group of guys can answer them, the Boston Celtics.

Hopefully they will be answered in june and on ducks boats, parading down the streets of Boston…