Truth is speaking, you should listen!

Tonight’s game against the New York Knicks may have been the worst and best halves of the season for the Celtics. The Celtics battled their way back from a 15 point deficit to defeat the Knicks, 96-86.

The Celts once again got off to a slow start and trailed by as many as 15 points and were down 14 at the half. A first half performance that led Doc to call his team soft.

Then Ray Allen got a taste of his own blood. Allen took an elbow from Jared Jeffries above his right eye, that left his face covered in blood.

After the elbow the Celts went on the attack, led by Rajon Rondo’s aggressive play. Rondo finished the game with 13 points and 12 assists. What was most encouraging about his play was that he showed no hesitation attacking the basket. Kevin Garnett led the C’s with 24 points and 11 rebounds. It was the fourth quarter in which the Celts seized control of the game. It was time for the truth, and “The Truth” Paul Pierce delivered with 11 clutch fourth quarter points. Pierce had a total of 21 points and 6 rebounds. Boston ended the game on a 24-4 run, and walked away from MSG with a huge road win.

The truth is speaking, and the truth is that the Celtics may be wavering, but the East Champs are regaining their bearings and are poised for a post season run. 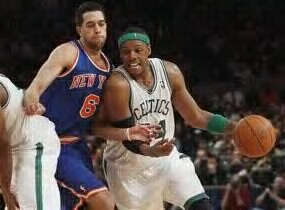