The Sixth Man of the Year is always an interesting award because a lot of the top candidates end up starting a good amount of games. That being said, they are not full-time starters for their respective teams, so the league often considers them sixth men. Here is my top 3 Sixth Men. 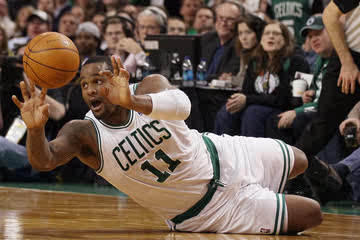 With the Celtics light in the front-court most of the season, they needed Big Baby Glen Davis to play well and they got it. Even with some of the questionable shot selections Davis had the best offensive season of his career. Davis is also a very good defender for his size and is one of the best in the league at taking charges.

Jason Terry will be a candidate for this award until he retires. Terry fits the role perfectly, as he provides instant offense off of the bench. Terry is the emotional leader of the Mavs and is counted on the lead the second unit. He is also the second option behind Dirk Nowitzki down the stretch.

Although not the best statistic season, Odom may have had the best season of his career. Odom averaged close to 15 points and 9 rebounds a game. He has solidified an inconsistent Lakers bench. Odom has a lot of pressure to perform because of the constant injuries to Andrew Bynum. This is by far the most consistent season on Odom’s career.

Just missed the cut: Thaddeus Young. Young who was once a starter, took on the sixth man role and ran with it. He provides scoring, defense, and athleticism off the bench. He is a spark plug to the Sixers’ attack and could very well have been in my top 3.