With Chauncey Billups out with a knee injury and Amare Stoudemire leaving with back spasms, Carmelo Anthony had to carry the load. Anthony poured in 42 points, but that still wasn’t enough to beat the Celtics in game 2. Rajon Rondo led the Celtic attack with 30 points and 7 assists. Kevin Garnett made a go ahead basket with 14 seconds left. On New York’s next possession Garnett stole and attempted pass from Jared Jeffries to seal the deal. The Celts held on for a 96-93 win.

The Orlando Magic put forth a better defensive effort in game 2 and evened the series with the Atlanta Hawks at 1 a piece. Perhaps the Magic were inspired from seeing Dwight Howard receive his Defensive Player of the Year trophy before the game. Howard led the Magic with 33 points and 19 rebounds. Jamal Crawford was the Hawks leading scorer with 25 points. 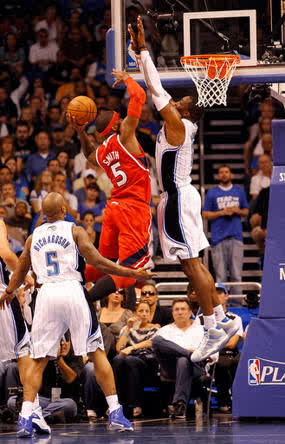 In what was supposed to be the upset pick in the west, has turned out to be all Dallas. The Mavericks used a fourth quarter surge to separate from the Blazers and take the two game advantage. Dirk Nowitzki was the high point man for the Mavs with 33 points. Peja Stojakovic tied a career playoff high with 5 three point field goals en route to 21 points. Portland was once again led by LeMarcus Aldridge who scored 24 points.