Playing in front of the home crowd for what could be its final time this season, the Indiana Pacers avoided the sweep and beat the Chicago Bulls in game 4. Danny Granger led the Pacers with 24 points. Derrick Rose sprained his ankle early in the game but did return to finish the game. 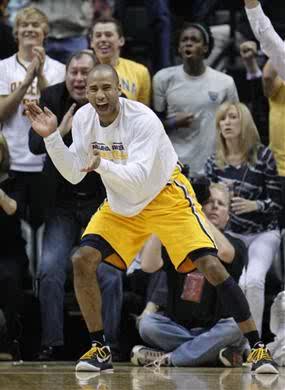 In what may have been the best performance of these playoffs, Brandon Roy had a classic performance to help his Blazers even up their series with the Dallas Mavericks at 2. Roy scored 24 points but it was his 18 fourth quarter points that will live in Blazers lore for years to come. The Blazers were down 18 going into the fourth, and as many as 23 in the game before Roy took over. Roy handled the ball and used dribble penetration to beat the Mavs’ defense. The performance was especially special to Roy because he has been battling painful knee injuries and has been a shell of his old self this season. Roy’s fourth quarter barrage included a huge 4-point play. Roy was in tears after the game as his teammates mobbed him on the sidelines. Portland fans will surely remember this fourth quarter performance for years to come.

As I stated a few a month ago, the Memphis Grizzlies will be a tough out in round 1 of the playoffs. The San Antonio Spurs are finding that out the hard way as they lost game 3 to the Grizzlies and now trail them in the series 1 game to 2. The Grizzlies led most of the way and withstood a late Spurs rally. The Spurs had a chance to tie the game in the final seconds but Manu Ginobili was unable to get up a shot before time expired. Zach Randolph scored 25 points to lead the Grizzlies while Ginobili paced the Spurs with 23 points.

The Thunder rolled into Denver and knocked the life out of them. The Thunder won game 3 and now hold a commanding 3-0 series lead. The Nuggets were intent on leaving Serge Ibaka open while they focused on Kevin Durant. Ibaka made them pay scoring 22 points and pulling down 16 rebounds. Durant would end up with 26 points and 6 assists. Denver’s J.R. Smith missed a tightly contested three point attempt as time expired. Nene led the Nuggets with 15 points and 10 rebounds. The Thunder will look to close out the series on Monday. 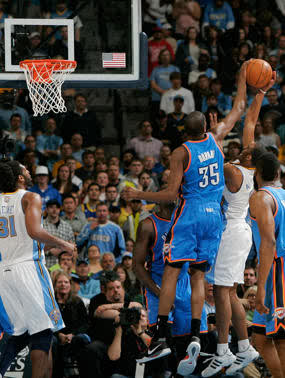