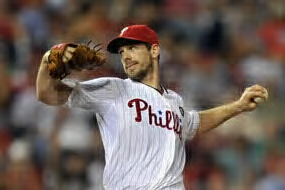 In what may be a World Series preview Cliff Lee tossed his third consecutive complete game shutout, as the Philadelphia Phillies took game one of their series with the Boston Red Sox 5-0.

Cliff Lee is the first lefty to throw three straight complete game shutouts since Randy Johnson in 1994. The Red Sox lineup was only able to muster up two hits off of Lee. In an attempt to generate more offense, the Red Sox will start David Ortiz at first and Adrian Gonzalez in left field on wednesday