After starting 3-0 in the Divisional round the St. Louis Cardinals ended my dreams of a perfect round when they shocked the Philadelphia Phillies in game 5. Here is how I see the league Championship series panning out.

Many may be surprised to see the Detroit Tigers in this round but I knew their pitching after Verlander would be too much for the Yankees. I think ot comes as no surprise that the Texas Rangers are back in the ALCS. After dropping game 1, the Rangers would rally to easily defeat the Tampa Bay Rays.

When you get this deep into the post season, pitching is almost always the deciding factor. Many underestimated Texas’ starting pitching but the combination of C.J. Wilson, Derek Holland, and Colby Lewis got the job done. They will be opposed by another stellar starting rotation of Justin Verlander, Doug Fister, and Rick Porcello. Although Texas has home-field advantage I really like Detroit. They have the luxury of throwing out the best pitcher in the game three times in a best of seven series, while their bats are on fire. I feel that the Tigers will have just enough pitching to tame the Rangers bats and advance to the World Series in 6 games. 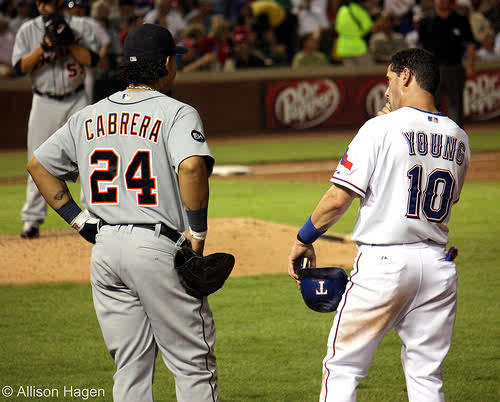 Is it the Squirrel? Whatever it is, the St. Louis Cardinals’ magical run continues into the NLCS after eliminating the Philadelphia Phillies with a 1-0 game 5 victory. The Cards will square off with the Milwaukee Brewers. The Brewers advance to the NLCS via a Nyjer Morgan game-winning single in the bottom of the 10th to eliminate the Arizona Diamondbacks.

The Cardinals are rolling right now. They are loaded with a lot of confidence and veteran leadership. They also have an ace in Chris Carpenter. Milwaukee, who survived a scare from the DBacks, also have a lot of confidence but lack veteran leadership. All signs point to the Cardinals continuing their run into the World Series, but I’m going to go with the Brewers. The Brewers have shown the ability to hit the opposing team’s top pitcher, while their lineup continues to be explosive. I also like the 1-2 punch of Yovani Gallardo and Zack Greinke. It will be a long and tough series but believe the Brewers will pull it out and advance to the World Series in 7 games.