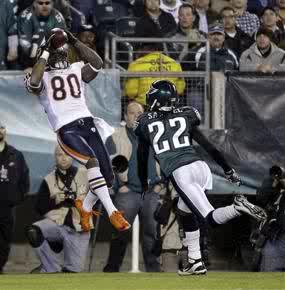 After trailing 24-17, the Bears scored 13 unanswered points to seize control and win the game 30-24.

After Matt Forte’s second fumble of the game, Eagles running back LeSean McCoy broke free for a 30-yard touchdown run to put Philly ahead 24-17. Those would be the last points the Eagles would score as the Bears would scored 10 points in the fourth, including a 5-yard pass from Jay Cutler to Earl Bennett. Up 27-24, the Bears would tack on a field goal and win the game 30-24.