The Miami Heat got a surprisingly huge fourth quarter from LeBron James and pulled away from the Knicks in Madison Square Garden. James finished with a team high 32 points, 17 of which came on the fourth quarter. James also had 8 rebounds and 5 assists. Dwyane Wade scored 20 points and Mario Chalmers threw in 19 points. The Knicks were led by Carmelo Anthony who scored 22 points. The Knicks will look to avoid being swept in game 4 in NYC.

The Thunder are one win away from eliminating the defending NBA Champion Dallas Mavericks. OKC used a huge third quarter spurt to run the older Mavericks out of the gym. Kevin Durant was the games leading scorer with 31 points and also had 6 assists. Russell Westbrook scored 20 points and James Harden added 10 off the bench. Dirk Nowitzki led the Mavs with 17 points. Dallas will look to stave off elimination at home in game 4. 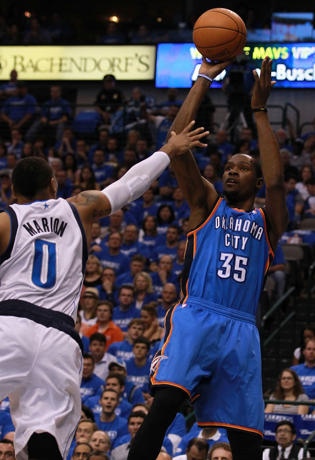