It’s playoff time in the NBA!  If the last night of the regular season(Warriors finishing 73-9, Kobe Bryant scoring 60 points in his final game of his career) is any indication of what the NBA Playoffs have in store for us then we are in for a wild ride.

I will previewing each round and providing my predictions for each series.  At the end of this post I will provide my initial Conderence Finals and NBA Finals predictions.

The Cavs are back atop the East and the Pistons are back in the Playoffs for the first time since 2009 when they were swept by the Cavs.  Detroit has a nice young squad with Andre Drummond and Reggie Jackson but they don’t have a shot against LeBron and company.  Cleveland should take this series 4-1.

The Raps are rolling through the six with the two seed.  The Raptors are notorious for choking early in the playoffs but they don’t have to deal with The Truth Paul Pierce this time around.  My guy Paul George will give the Raptors fits offensively and defensively but the Raps should finally get out the first round.  I’m taking Toronto 4-2.

Upset alert!  I really like the Hornets in this series.  Charlotte boasts the best record in the conference since the all star break at 21-8.  Miami on the other hand backed their way into to three seed after blowing a 26-point lead against the Celtics on the final night.  Miami struggles to score at times while Charlotte is a pretty good shooting team. Look for Kemba and company to take this series 4-2.

I believe this will be the best first round series in the east.  Two evenly matched squads going at it.  The Hawks took three out of four in the regular season and have homecourt advantage.  This tough and scrappy Celts team aren’t afraid of playing on the road and proved they can win in hostile environments all season especially when the they snapped the Warriors’ 54-game home winning streak.  I’m rocking with my hometown Celtics in this series 4-3.

Warriors sweep.  On the the next series…

Spurs sweep.  On to the next series…

After the offseason they went through I’m glad to see the Mavericks in the playoffs.  We won’t be seeing for long though as I expect Westbrook and the boys to be on a mission and make quick work of the Mavs.  OKC drops one in Dallas but rolls to 4-1 series victory.

This 4/5 matchup in the west will also be the best series in the conference.  Damian Lillard and C.J. McCollum have become one of the best scoring duos in the league and pushed the surprising Blazers all the way up the the 5th seed.  The will surely give the Clips trouble.  The veteran Clippers are led by Chris Paul who is playing some of the best ball in his career.  Blake should be ready to roll and they have The Truth hiding on the bench. We all know what Pierce does in the playoffs. The Clips should survive 4-2.

Just so its on the record I’m picking the Cavs over the Raptors in the east and the Warriors over the Spurs in the west.

So who do I have winning the title?!?! 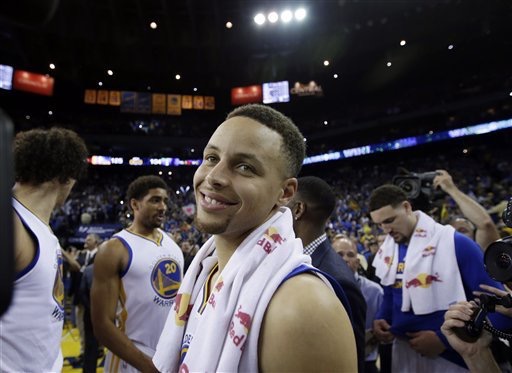