The Miami Heat are into round 2. Dwayne Wade led Miami to a victory over the Philadelphia 76ers in game 5. Wade’s game high 26 points was enough to send the Sixers home for the summer. Mario Chalmers came up big with 20 points. Andre Iguodala and Elton Brand led Philly with 22 points. The Miami victory sets up a second round matchup with the Boston Celtics.

The Memphis Grizzlies had the series won, and the Spurs were on their way home for the summer. That was until Gary Neal had a change of plans, and hit a 3 pointer as time expired in regulation to send the game into OT. The Spurs controlled the overtime and forced a game 6 in Memphis. Manu Ginobili led the Spurs with 33 points, and Tony Parker added 24 points. Zach Randolph led the Grizzlies with 26 points. 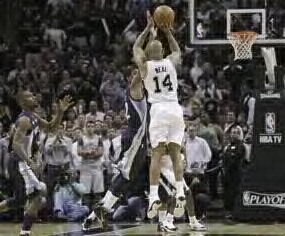 Kevin Durant would not let the Thunder lose as they took care of business and eliminated the Denver Nuggets. Oklahoma City put the ball in their superstar’s hands and he carried them to round 2. Durant made a bevy of shots down the stretch and finished with 41 points. Serge Ibaka came up large defensively, blocking 9 shots. Arron Afflalo of the Nuggets missed a game tying 3-pointer as time expired. 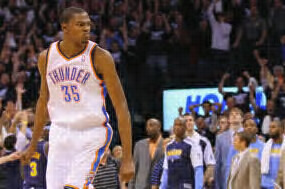