The Birds are still flying in Atlanta, as the Hawks defeated the Orlando Magic in game 6 to send the Magic back to Disney World for the summer. The Hawks got out to an early lead and held on for a three point win. Josh Smith blocked Jason Richardson’s 3 point attempt with 1.7 seconds left, to end the game. Joe Johnson scored 23 points to lead the Hawks. Dwight Howard scored 25 points in a losing effort. The Hawks will face the Chicago Bulls in the Eastern Conference Semifinals. 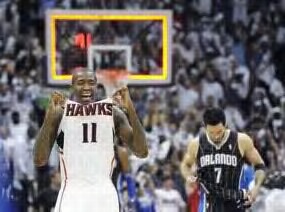 The defending champs are moving on. The Los Angeles Lakers ran away from the New Orleans Hornets in the second half, and eliminated the Hornets in six games. Kobe Bryant scored 24 points, and Andrew Bynum added 18 points for the Lakers. Carl Landry was the Hornets’ high scorer with 19 points. The Los Angeles Lakers will face the Dallas Mavericks in the Western Conference Semifinals.

After trailing by 16 points going into the fourth quarter, the Portland Trailblazers got within four points. There would be no repeat of game 4, as the Blazers would not get any closer, and were eliminated by the Dallas Mavericks in game 6. Dirk Nowtizki scored 33 points and grabbed 11 rebounds to lead the Mavericks to victory. Jason Terry was his usual reliable self off the bench with 22 points and 8 assists. Gerald Wallace led the Blazers with 30 points. The Dallas Mavericks will now face the Los Angeles Lakers in the Western Conference Semifinals.