Even though Chicago took out the Indiana Pacers in five games, the Bulls were exposed. The first weakness Indiana exposed was in Chicago’s defense. The Pacers were successful in transition and got out and ran on the Bulls. Chicago does not defend transition very well and that is one facet of the game that Atlanta does well. Furthermore, Indiana was also successful when they attack the middle and took it right at Chicago’s bigs. Atlanta must get the ball down low in order to be successful. Chicago’s major strength is their soon to be MVP point guard Derrick Rose. Everything they do goes through Rose and they rely heavily on him. If Chicago is able to make shots, their half court defense will smother the Hawks. Also, the Hawks will suffer if Kirk Hinrich is unable to play in this series. In the end I believe this will be a 7 game series, that Derrick Rose and the Bulls will narrowly win.

The heavyweight bout is upon us! This is the matchup that everyone wanted to see. Although it is not in the Eastern Conference Finals, it’ll sure be a classic. The Boston Celtics are going to need a huge series from their bench, in particular Jeff Green. Paul Pierce is going to exert a great deal of energy defending LeBron James, that his offense will surely suffer. Jeff Green needs to be a steady force off the bench and score the basketball. Ray Allen has a tough matchup with Dwayne Wade, but Wade also has a tough matchup with Ray. Wade had a tough time keeping up with Allen running around and coming off of screens. The matchup of Kevin Garnett and Chris Bosh is going to be critical. Boston will have the advantage at the point guard position. Miami has nobody who can keep up with Rajon Rondo and Rondo destroys teams who don’t feature a star point guard. Lastly, Miami will have to control to boards to win this series, and Bosh must out play Garnett. Shaquille O’Neal and Udonis Haslem will be wild cards in this series if they see any action. In the end, Wade, James, and Bosh will not get enough support from their supporting cast to beat the Celtics. Boston should take the series in 6 games.

Memphis will have to continue their stellar defensive play if they wish to continue their magical run. Their first priority is to slow down Kevin Durant. Tony Allen is quick, and aggressive and will bother Durant but KD has an extreme height advantage over Allen. Shane Battier will see some time defending Durant but he may not have the foot speed to keep Durant in front of him. Memphis must also be a force down low like they were against San Antonio. Zach Randolph and Marc Gasol will not be able to push around Kendrick Perkins and Serge Ibaka the way they did Tim Duncan and Antonio McDyess. Both teams will need help from their bench players. Then winner of the James Harden and O.J. Mayo will provide their team with a huge advantage. In the end, the Thunder are everything the Spurs aren’t and that is why they will beat Memphis in 6 games. 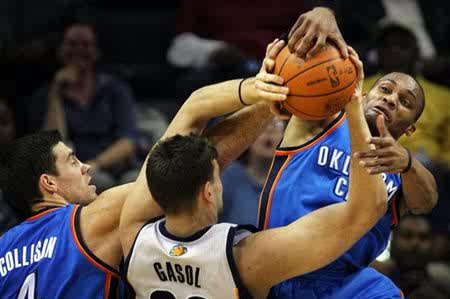 Dallas matches up very well with the Lakers. They have bigs who can defend Andrew Bynum and Pau Gasol and active wing players who they can throw at Kobe Bryant. The question is, does LA have anyone who can slow down Dirk Nowitzki? Ron Artest will probably start out on Dirk and play very physical. That being said Artest has a height disadvantage and Nowitzki can just shoot over him. Lamar Odom will get a crack at Dirk but defense isn’t the best part of his game. In the end, Dallas’ wing players will not be able to stop Kobe Bryant and he will lead LA to a close series win in 7 games.