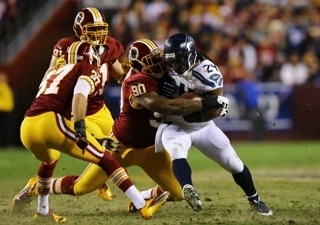 The Washington Redskins didn’t just lose to the Seattle Seahawks, they may have lost their prized rookie quarterback Robert Griffin III to a more serious injury to his right knee.

Down 14-0, Seattle scored 24 unanswered points to shock the Redskins on their own field 24-14. Marshawn Lynch had a big day for the Seahawks with 131 rushing yards and a touchdown. Russell Wilson passed for 187 yards, with a touchdown, and rushed for 68 yards.

Seattle will travel to Atlanta next week to face the top seeded Atlanta Falcons.

Midway through the fourth quarter a hobbled RGIII attempted to corral an errant shotgun snap, when his injured right knee buckled. Griffin remained down on the field for a few minutes before walking off and not returning to the game.