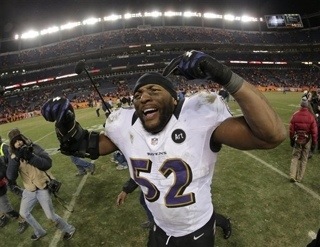 Ray Lewis lives to fight another day. Joe Flacco and the Baltimore Ravens pulled off a Mile High stunner and eliminated the top seeded Denver Broncos 38-35 in 2OT.

Down a touchdown with under a minute to play, Joe Flacco threw up a high floater, that landed in the arms of Jacoby Jones who inexplicably was allowed to get behind the defense for a 70-yard touchdown. In Denver’s second possession of overtime, Peyton Manning was picked off by Corey Graham near midfield. The Ravens would win the game five plays later with a 47-yard field goal by rookie kicker Justin Tucker. Ravens players spilled out onto the filled in joy, including a very emotional Ray Lewis.

Joe Flacco passed for 331 yards and 3 touchdowns, while Ray Rice rushed for 131 yards and a touchdown. Torrey Wilson caught three balls for 98 yards and 2 touchdowns. On defense, Corey Graham had 2 interceptions, including a pick-six. Ray Lewis led all players with 17 tackles. For the Broncos, Peyton Manning passed for 290 yards, 2 touchdowns, and 3 interceptions. Return man Trindon Holliday had a punt return touchdown as well as a kick return score.

The Ravens will now wait to see is they will be heading back to New England or Houston for the AFC Championship. 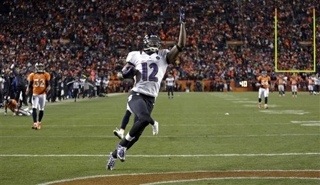