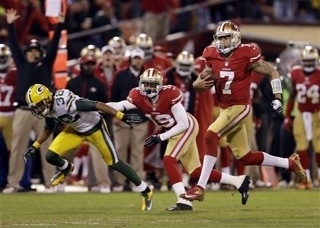 It may have been his first playoff start, But Colin Kaepernick sure didn’t play like it was. Kaepernick shredded the Green Bay defense on the ground and threw the air en route to a 45-31 victory.

A close game heading into the final period, was blown wide open by Kaepernick. CK7 rushed for a huge 56-yard touchdown and the final frame to open the flood gates. Kaepernick rushed for a quarterback record 181 yards, and passed for 263 yards. He accounted for 4 touchdowns, two in the ground and two by air.

The San Francisco 49ers return to the NFC Championship where they will face either the Atlanta Falcons or the Seattle Seahawks.