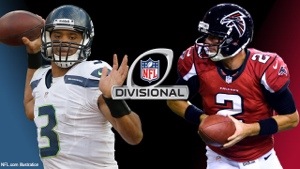 With Wildcard Weekend behind us, it is time to take a look at the Divisional Round matchups.

After going into the nation’s capital and knocking off the Washington Redskins, the Seattle Seahawks travel to the ATL to take on 13-3 Atlanta Falcons.

There is no team with more pressure than the NFC’s top seed the Atlanta Falcons. With that, there is no player with more pressure on them to make a playoff run than Falcons quarterback Matt Ryan. Ryan will look to get the playoff monkey off his back today. In order to do so Ryan is going to have to have a big day against this tough Seahawks defense. How will the big Falcons receivers do against the big Seahawks corners? For Seattle, they will rely on their defense once again. Will the loss of top pass rusher Chris Clemons do-in the Seahawks?

In the end I think the Seahawks offense will prove to be the difference. The Russell Wilson and Marshawn Lynch attack will be too much for the Atlanta defense. I think Matt Ryan’s playoff struggles continue, and the Seahawks will advance. 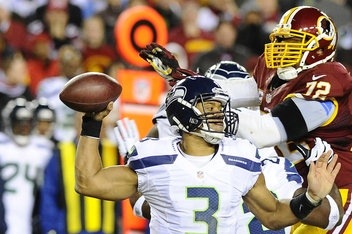