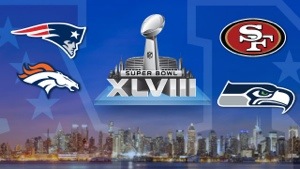 No more Brady vs. Manning talk, no more Kaepernick Beats by Dre commercials, championship Sunday is here! For the first time in a while the four best teams at the start of the season, are the four teams remaining. After going 4-0 in our picks last weekend, KAT is looking to improve on out postseason record with our conference championship predictions. 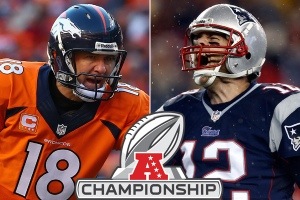 They meet again, Tom Brady and Peyton Manning arguably two of the top 5 quarterbacks to ever play the game. Once again they are playing for a shot to advance to the Super Bowl.

Much like their week 12 matchup I’m expecting this game to be another nail biter. The potent Denver passing attack will have tight end Julius Thomas for this tilt. Look for Manning to target him early and often. I don’t expect Knowshon Moreno to rush for 224 yards again so look for Manning to spread the Patriots defense out a little more and to use his bevy of receivers. On the defensive side of the ball Pressure is the key, if they can apply consistent pressure on Brady then the Broncos will have a lot of success. This may be difficult without Von Miller.

For the Patriots, they’ll want to keep the ball out of Peyton Manning’s hands as much as possible. In order to do that the Patriots will need to win the time of possession battle. Expect to see a heavy dosage of this new Patriots run game. Look for LeGarrette Blount, Stevan Ridley, and Shane Vereen to be featured a bunch. Lets not forget about Brady, he can still pick a defense apart. Look for his to target Julian Edelman all game. On defense the Pats must knock Manning off his spot. Once you get Manning moving his passes come out with a lot less zip and tend to float.

So who wins? I think it’ll come down to which quarterback will make the play down the stretch. Big game, Super Bowl birth on the line, Brady or Manning…I like Brady. The pats head to MetLife Stadium for the Super Bowl with a 34-31 victory. 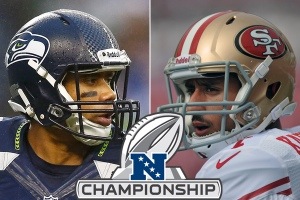 Did you expect anything else in the NFC? The two best teams left are also the two best defensive teams. Expect this to be a hard hitting defensive slugfest. Oh, and there are also two very good young quarterbacks playing.

The Seattle Seahawks have the best home field advantage in the game and also the best defense in my opinion. This defense will need to rattle Colin Kaepernick like they did in the Niners first trip to Seattle this season. They will also need to trap Anquan Boldin on Sherman Island. The Seahawks offensive game plan will start and end with Marshawn Lynch. They will need him to be in beast mode, while Russell Wilson must continue to do what Ed done all season and protect the football.

The San Francisco 49ers also bring a battle tested defense to the fight. Aldon and Justin Smith will need to apply pressure on Wilson to see if they can generate some turnovers. If they can make Seattle on dimensional they’ll have a much better chance of containing Lynch. On offense they’ll need their stud quarterback to put on his beats and block out the noise. Kaep will need to make plays with his arm and legs to keep the Seattle defense honest. Look for Kaep to try and free Boldin from Sherman Island with a couple deep balls, but ultimately his best option should be Vernon Davis.

I went back and forth with this one as the Seahawks are so stout on defense, but yet Colin Kaepernick is so battle tested. In the end I like the Seahawks more at home. Seattle advances to the Super Bowl 20-17.